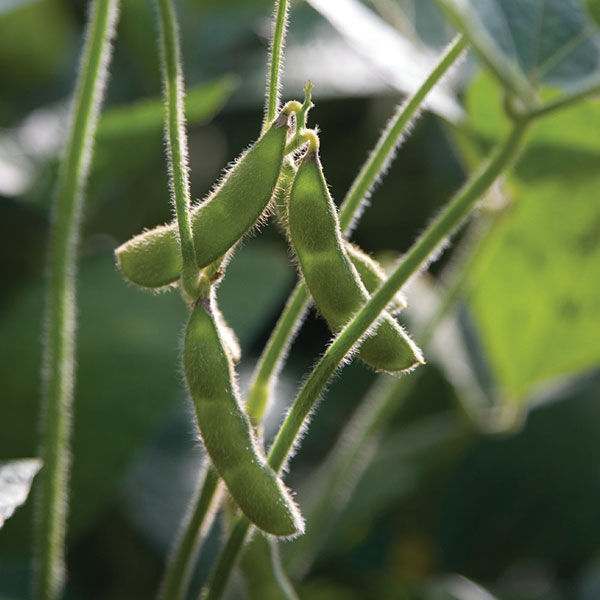 Georgia grower is the first farmer in the world to produce 400-bushel corn and 100-bushel soybeans in the same year.

Randy Dowdy confessed to being a bit stressed on this day in late August, an ever present can of 7UP in his hand. The corn-growing champion, who produced a pair of 400-bushel entries in the 2013 National Corn Growers Association (NCGA) National Corn Yield Contest, had set his sights higher this year. He wanted to send another 400-bushel entry to the corn contest and produce the first-ever, certified 100-bushel-per-acre soybean yield in Georgia. 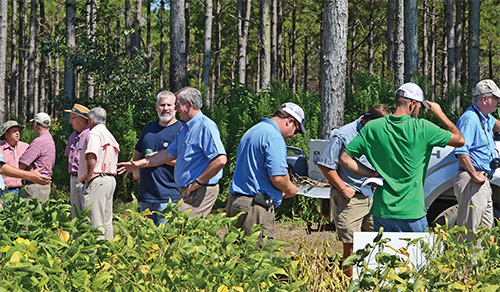 Even before the harvest, word went out that Georgia corn yield champ Randy Dowdy(left-center) had likely produced 100-bushel soybeans. He did—three times.

He spent entire days addressing yield limiting conditions, large and small. Now, as he sits with a visitor, the corn harvest is behind him and the soybean harvest pending. One hundred farmers, researchers and industry representatives would arrive early the next morning to glimpse his bean plots. Scouting already hinted he had reached the century mark. But harvest, still a dozen hot, dry days off in his full-season plots—with root knot nematodes creating havoc below the soil surface and deer munching away above—would finally tell the tale. Dowdy sits at the kitchen island of his new home, looking out over a 4-acre bass pond. Guests will fi nd he has an enthusiasm for deer hunting on par with setting corn and soybeans yield records. Mounts, some with Boone and Crockett Club scores in the 160s, hang high along walls at the home’s entrance. Home and pond are found outside Pavo, Ga., a few miles south of Moultrie.

“We wanted to see what could be accomplished in this climate,” Dowdy says. “I don’t have preconceived notions. I have to focus on yield and every component of yield.”

PROACTIVE  MANAGEMENT. Dowdy farms 1,700 acres, his practices reported on his website www.growbigcorn.com, and has a reputation as an aggressive, opinionated, outspoken manager, suspicious of conventional thought. He will collect new yield trophies this year. Under stern admonishment from the NCGA not to reveal the results of his corn contest entries, he admits only to exceeding 400 bushels of corn again—goal No. 1 achieved.

His soybean story unfolded over a couple of weeks. On Sept. 11, 2014, he collected a 110.66-bushel yield from a Southern States indeterminate soybean plot, outlasting deer and nematodes, and setting a Georgia record. Days later, Dowdy harvested 109.41 bushels in a plot with DuPont Pioneer 47T36, another indeterminate variety. Then on Sept. 22, he counted 108.06 bushels from another plot. This plot held Pioneer P52T50R, a Roundup Ready, Maturity Group V. And somewhat unexpectedly, it was a determinate variety. Goal No. 2 achieved—three times over.

They were “big, beautiful beans,” McGriff says of the full-season, late-Group IV indeterminate variety. The yield monitor bounced up and down from 75 to 140 bushels along the 30-inch rows—evidence of nematode damage.

Dowdy’s 60 acres of “glorified research plots,” as he describes them, contained a dozen varieties from Southern States and DuPont Pioneer. The maturity groups ranged from Maturity Group IIIs to late-Group VI. Georgia growers typically plant Group Vs through Group VII varieties, and at times, Group VIIIs.

Pioneer’s 47T36 was a 2013 winner in the Arkansas Soybean Association yield contest. It yielded 88.369 then and topped 100 bushels in Arkansas on-farm strip trials this year. Pioneer’s P52T50R was a bit of a surprise. “We broke a hundred with a determinate. That is significant. That is huge,” Dowdy says in an early morning phone call.

UNEXPECTED YIELD. “It’s a very good yield for a determinate [variety],” says Dan Poston, agronomy research manager for the 13 states in DuPont Pioneer’s Delta and Southeast commercial units. Under high-yield conditions, 80 bushels is very achievable with this variety. But neither DuPont Pioneer or growers would expect 108 bushels in south Georgia from a variety typically grown north of I-40 in Arkansas.

These yields came from plots planted May 6 through 7 and are a fairly amazing result for this Deep South corner of soybean country. “This sort of flies in the face of everything we’ve taught growers,” says John Woodruff, former University of Georgia Extension soybean specialist, who joined Dowdy, McGriff and Poston in the plot work.

Typically, Georgia growers look for late-maturing soybean varieties. They are harvested after cotton, peanuts and corn, and benefit from late-season rainfall, often from tropical systems. Dowdy is gaining fresh ideas from Arkansas soybean growers. They are cutting 100-bushel beans in an early-season planting system with indeterminate varieties. The early system has been developed primarily in Arkansas, Louisiana and Mississippi. The practice has not been thoroughly vetted in Georgia. 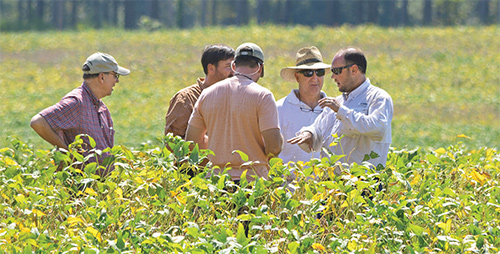 Dowdy planted four Pioneer indeterminates this year. All produced 100 bushels in contest and strip trial plots in Arkansas. “We can’t point to any one thing they are doing, but [Dowdy believes that] if they can do it, we should be able to do it,” Woodruff says.

Georgia has a stellar reputation for cotton and peanuts. The more recent opportunity to profit from soybeans has raised interest in what had been a minor crop. Georgia’s yield average is in the mid- to upper 30s; irrigated fields are in the 70s. The previous Georgia soybean record was 82 bushels.

NEW OPTION. “We’ve proved high-yield production is possible in Georgia,” Dowdy says. “But how do you make that affordable?” Cost will be discussed in wintertime soybean colleges hosted by Southern States.

Soybeans are a journey of discovery for Dowdy, one largely motivated by Kip Cullers and the numbers one, six, zero, point six. Cullers in 2010 produced a record 160.6-bushel yield at his farm, outside Purdy, Mo. Cullers has been tight-lipped about the finer details of his practices but does offer two pieces of advice. First, he says, make sure the plant wants for nothing. Second, try new things.

“This is a different animal,” Dowdy says, of high-yield soybeans. “The key is managing stress. You either eliminate stress, or you address it.” One factor is fertility. Dowdy took weekly leaf tissue tests and graphed the results. When the lines for nutrients began to sag, the deficiency was addressed. One 0-0-16 application was made with irrigation to address a late-season potash deficiency—a response to a “want” by the plant.

In the Southern States’ varieties plots, potassium nitrate was applied prior to planting as the primary potash source. “We were looking to see if we could get a yield bump by not using potassium chloride as our source of potash,” McGriff says. Some varieties are sensitive to the chlorine in muriate of potash. Dowdy plans to use K-Mag for potassium in 2015 instead of potassium nitrate to avoid potential lodging from an early N application.

That is a “try something new” idea.

The soybeans were planted at a depth of 1 to 1¼ inches. Seeding rates ranged from 125,000 to 145,000 seeds per acre. The expectation is that the higher-yielding soybeans would be found in indeterminates, even though these are generally susceptible to a Southern pest, root knot nematodes.

“We are test-piloting indeterminates [at Dowdy’s farm],” Poston says. “We wanted to see the genetic yield potential.” That a determinate variety also produced 100 bushels raises interesting possibilities. “But [DuPont Pioneer] is not recommending indeterminates for Georgia,” Poston stresses. “Farmers should stick to well-adapted determinates with root knot nematode resistance.”

Dowdy’s 100-plus yields came from soil that was in pines three years ago. He chose it, hoping it had no nematodes. The soils are sandy to sandy loam, with clay hilltops. “It’s only good to hold the world together. But God made it, so we can work with it,” Dowdy says. He worried about the nematodes’ impact on yields if they showed up, and they did toward the end of the season.

“You either kill the nematodes or you overcome them with fertilizer and water,” Dowdy says. He tried water and fertilizer this year. For next year, Dowdy is considering Telone II, a preplant soil fumigant.

DROWNED INTENTIONS. Dowdy had intended to plant in mid-April. But 30 inches of rain from March 15 on soaked the field. The farm also recorded a 12-hour, 6-inch rain just as the crop was emerging. That didn’t help.

All varieties had an ABM liquid inoculant applied infurrow. Its America’s Best Inoculant system for soybeans contains a rhizobia strain for high yields. Priaxor was sprayed in-furrow to combat seed and seedling rot.

Weeds were an issue, especially morningglory and sicklepod. On the advice of Georgia Extension weed researcher Eric Proskto, next year Dowdy plans to apply Warrant for preemergence residual control, Prefix (Dual and Reflex) plus Roundup two weeks later and then Roundup and First Rate two weeks after that.

Monty’s Liquid Carbon was applied with Warrant. The soil conditioner is designed to reduce soil compaction. As seasonal rains ended, Dowdy applied 1½ inches per week during blooming and 2½ inches a week after that.

“Key to the success of this crop is God and God’s blessings of good weather,” he says. Management is another. “Manage stress—or eliminate it. Fertility. Tissue samples. Weeds. Insects. Planting populations. Water. It’s the entire system.”

Read this article as a PDF.